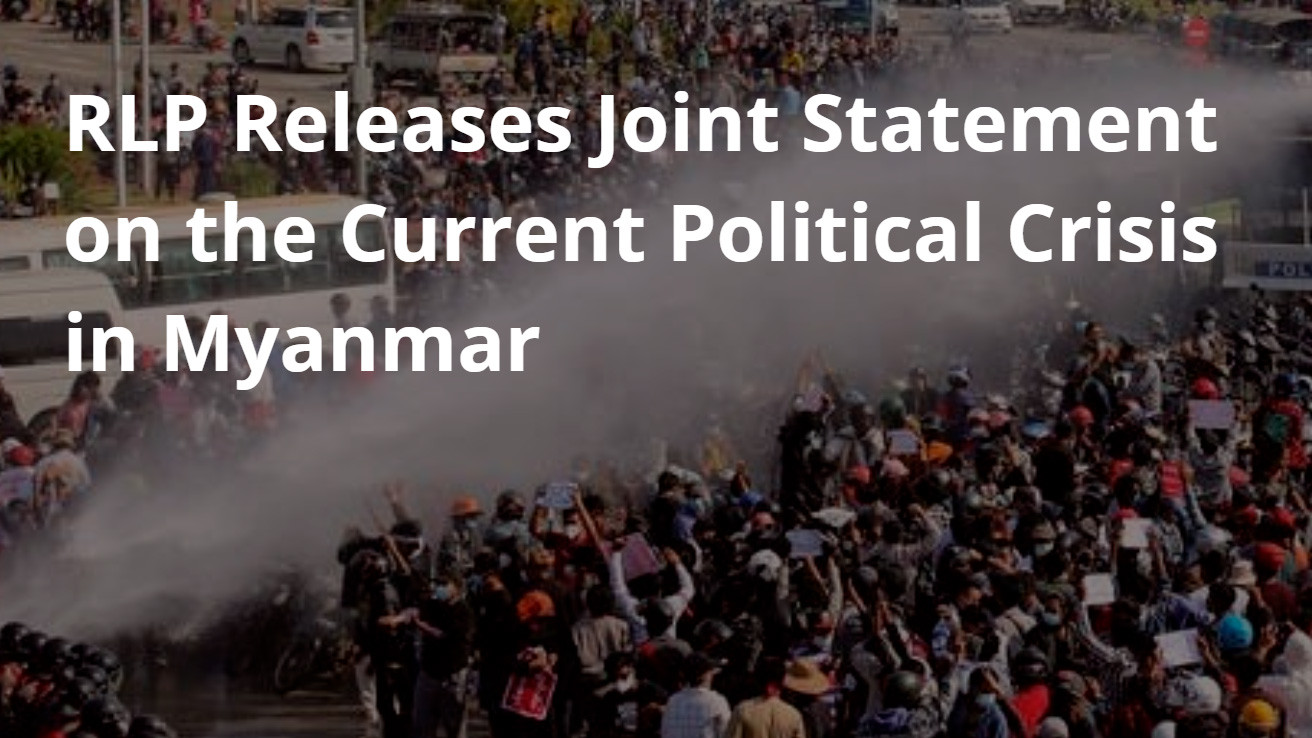 RLP Statement on the Current Political Crisis in Myanmar

“I couldn’t sleep, and I cried out to God more than three times that night. Our

dreams, hopes, vision and freedom are taken away. Our lifetime has been full of

grief, fear and trouble under the military regime.”

We, the members of the Religious Liberty Partnership (RLP), express our deep concern at the shocking violence being committed against peaceful protesters by security forces in Myanmar, and our condemnation of the illegal coup d’état on 1 February 2021 which overthrew a democratically elected government and disrespects the expressed will of the peoples of Myanmar. We are further troubled that military control has the potential to exacerbate religious persecution and intolerance, as we continue to hear of rising Buddhist nationalism and attacks on houses of worship.

Since 1 February, over 700 civilians within the urban areas have been killed and over 3,000 arrested in the flagrant misuse of power in the country. There are several reports of Christian and Buddhist places of worship– including Catholic and Anglican churches, and Buddhist monasteries – being raided allegedly to clamp down on illegal activities or anti-coup activists. In February, Myanmar security officials raided the Hakha Baptist Church in Chin state and arrested the pastor; in early March, four Kachin Baptist ministers and six congregants were arrested at a church in Lashio;2 also in March, Tatmadaw soldiers fatally shot a 25-year-old pastor in Kalay township.3

In addition, the ongoing bloody crackdown has left ethnic religious minorities even more vulnerable, with thousands fleeing the country in search of safe havens. For those that are unable to escape, every day is lived in tremendous fear. One Christian, Min Naing, explained “every day I hear the sound of gunshots and grenades near my house.” Another pastor led his community to escape their village and hide in a nearby forest. And no fewer than 100,000 people – including from the primarily Christian Kachin and Karenni, many Christians among the Karen, as well as the Shan and others – are residing in camps for internally displaced people.4

The indiscriminate bombing of peaceful villages within ethnic minority states including in Karen, Kachin, and Shan States is causing widespread suffering. We express our deepest sympathy to, and prayers for, those who have lost family members in the military’s crackdown and in the air-strike attacks in ethnic minority areas in the country’s borders with Thailand and China.

We call on the security forces to immediately stop using brutal force against protesters and civilians throughout the country. The courage of the peaceful protest in the face of such brutal crackdown is a source of hope for all who are fighting against injustice in various countries and contexts. Peaceful protesters against the military must be allowed and protected. The military must also immediately release all political prisoners and take necessary steps to ensure the return of Myanmar to normalcy and democracy without delay.

As a coalition of organizations focused primarily on the promotion and protection of freedom of religion or belief around the world, we condemn the military regime’s long-standing and total disregard for this basic human right as set out in Article 18 of the Universal Declaration of Human Rights.

For decades, the military regime has weaponized religion, religious nationalism and religious identity, persecuting ethnic and religious minorities in similar ways while at the same time attacking Buddhists who either oppose its dictatorship or promote religious freedom and interreligious dialogue.

Certain Buddhist monks have been jailed, churches have been raided, Muslims face discrimination, and the Rohingyas - a predominantly Muslim community - continue to suffer genocide. The Karen, Karenni, Kachin and Chin are significantly Christian communities in size and face ethnic and religious discrimination and persecution. All are suffering at the hands of a regime which is cracking down on any perceived threat to their power, including religious communities and religious leaders.

The RLP calls for the unity of all faith communities to oppose and refuse to become complicit with the military junta’s murderous actions. We are already encouraged to see Christian ministries and pastors from all church traditions, Catholic, Protestant and Evangelical, participating in peaceful resistance and civil disobedience by holding marches and demonstrations to condemn the military coup.5

The RLP applauds the efforts of the National Unity Government, and in particular its Minister for International Cooperation, Dr Sasa, to envision a new, inclusive future for the country, with a secular constitution and equal rights for all peoples of every religion and none and all ethnicities. We urge the international community to recognise and engage with the NUG as the legitimate representatives of the people of Myanmar.

Finally, we encourage the global Church to continue to pray for Myanmar, to heed the requests for prayer from Christian leaders including Myanmar’s Cardinal Bo, the President and General Secretary of the Kachin Baptist Convention, and the WEA’s Godfrey Yogarajah, among others. We pray for a new dawn for Myanmar, a new and genuine federal democracy, respect for human rights for all, and a path of real justice, true and lasting peace and lasting reconciliation.

Member Organisations of the Religious Liberty Partnership who are signers of this Statement:

~ Institute on Religion and Democracy, USA

~ Voice of the Martyrs, Canada

~ WEA Office of the Ambassador for Religious Freedom

1. Open Doors, “’It feels like our hope has been taken away’ – Christians in Myanmar need your prayers following military coup”, 2 February 2021.

4. Zara Sarvarian, “After the Myanmar coup, Christians are ‘hiding in the forest for safety’”, Open Doors, 19 April 2021.

Issued by the Religious Liberty Partnership on June 7, 2021

The Religious Liberty Partnership is a collaborative effort of Christian organisations from every continent focused on religious liberty for all. The RLP seeks to work together more intentionally in addressing advocacy, research, assistance, and in raising the awareness of religious restrictions globally.