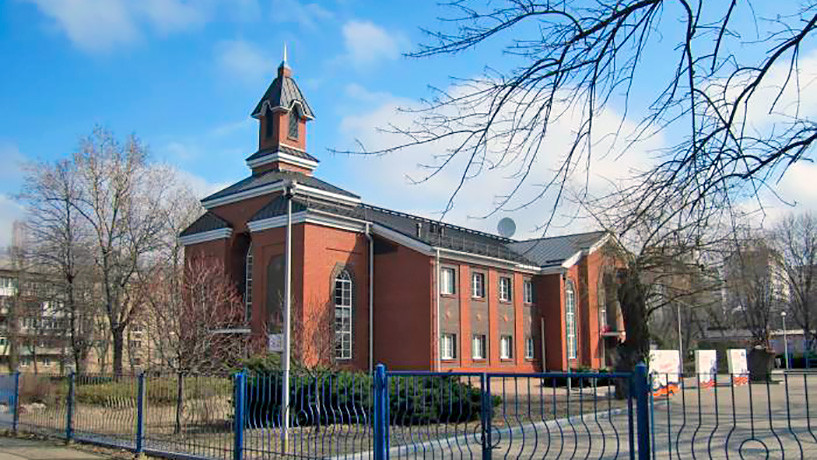 Russian-backed military formations have opened the "Russian House" Center for Russian Culture in Donetsk with the participation of Russian Parliament deputy Viktor Vodolatskyi. The institution was placed in a building that, before the beginning of the Russian aggression, was the meeting house of the Church of Jesus Christ of Latter-day Saints (Mormons).

This was reported by pro-Russian media, noting that following the outbreak of hostilities, Mormons stopped operating in the region.

In Soviet times, a cinema was located on the site of the future Mormon meeting house. Later, it was closed, and the building began to collapse. In the early 2000s, the ruins were removed, and the Donetsk Mormon community built its own meeting house on the site. It is also known that this religious building, was built, at least partially, at the expense of donations from believers – residents of Donetsk and the region.

In 2014, after the seizure of power in Donetsk by Russian-backed military formations, the Mormon meeting house was illegally confiscated and soon transferred to the so-called "Center for the development of youth initiatives of the Donetsk People's Republic". In those circumstances, the Mormon religious community was forced to either leave the region that was no longer controlled by the Ukrainian Government or practice their faith privately.

As reported by the Institute for Religious Freedom, in the period from 1997 to 2008, the Church of Jesus Christ of Latter-day Saints built four meeting houses in Donetsk. With the outbreak of war, all these religious buildings were confiscated by the Russian-controlled authorities of the so-called "DPR". In addition to the aforementioned "Russian House", three other Mormon meeting houses currently serve as civil registry offices: in the Kuibyshevskyi, Proletarskyi, and Kirovskyi districts of Donetsk.

According to research that was conducted by human rights activists, since the beginning of the Russian aggression, evangelical Christians, Ukrainian Orthodox communities, Greek Catholics, Jehovah's Witnesses, and Mormons have become the main targets of religious persecution by the occupation authorities in the Donetsk and Luhansk regions. Evidence of this is presented in the IRF report titled "Freedom of religion under attack: Russian terror in the occupied territories of Eastern Ukraine."