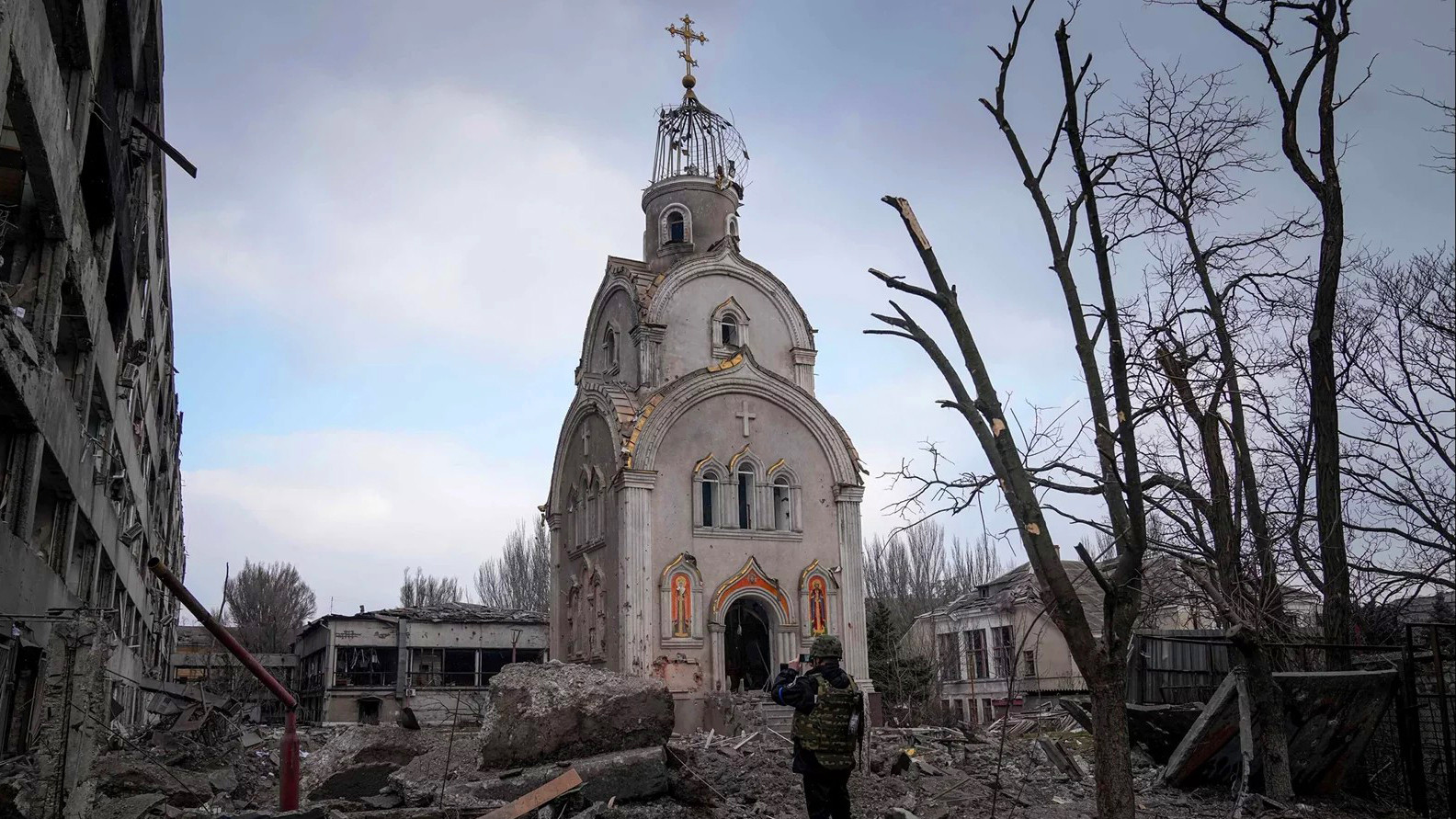 of Euromaidan SOS and the Religious Freedom Roundtable in Ukraine

regarding the attack on religious freedom during

the armed aggression of Russia against Ukraine

The armed aggression of the Russian Federation against Ukraine is accompanied by numerous violations of rights and freedoms, including freedom of thought, conscience, and religion.

Russian religious persecution in the occupied Donetsk and Luhansk regions

Back in 2014, in occupied Donetsk, illegal armed groups controlled by the Russian Federation declared the orthodoxy of the Moscow Patriarchate the main religion of the region and began deliberate persecution of religious minorities. To implement this provision in practice, confessions other than the Orthodox Church of the Moscow Patriarchate started to be persecuted in the Russian-controlled Ukrainian territories of the Donetsk and Luhansk regions. Dozens of churches, prayer houses, and places of worship were captured. Abductions, torture, and extrajudicial executions of clergymen and believers of the Orthodox Church of Ukraine (previous name – the Ukrainian Orthodox Church of the Kyiv Patriarchate), the Ukrainian Greek Catholic Church, and a number of Protestant churches (Baptists, Pentecostals, Adventists, Ukrainian Christian Evangelical Church, etc.) became commonplace. The LDS Church (Mormons) and Jehovah's Witnesses were subjected to targeted harassment. As a result, in the Russian-occupied territories of the Donetsk and Luhansk regions, most religious communities have ceased to exist, believers are forced to pray privately or gather clandestinely, and freedom of thought, conscience, and religion has disappeared.

The forced implementation of the Russian legislation has significantly worsened the situation of religious communities and associations in occupied Crimea. Since the beginning of the Russian military intervention on the Crimean Peninsula in February 2014, Ukrainian churches and religious communities have become targets for purposeful harassment of their activities. During the years of occupation, the number of parishes of the OCU reduced from 49 to 5. The occupation authorities of Crimea continue to persecute religious figures and individual believers, in particular Muslims from among the Crimean Tatars, the community of the Orthodox Church of Ukraine, evangelical Christians and Jehovah's Witnesses. One of the methods of pressure became the deprivation of ownership of religious buildings of Ukrainian churches through physical seizures and decisions of the courts of the occupation authorities. As a result of Russia's recognition of Jehovah's witnesses as an extremist organization, there are already 5 representatives of this religious group behind bars in Crimea, and many others face many years in prison. Currently, the practice of mass raids on mosques to check the documents of Muslims is widespread in Crimea. The number of cases initiated for belonging to religious organizations recognized as terrorist or extremist in Russia is growing, which is often just a formality with the goal of legalizing the persecution of religious minorities.

Religious persecution became much worse during the large-scale armed invasion of Ukraine by the Russian Federation, which began on February 24, 2022, and continues to this day. Targeted attacks and destruction of cathedrals, prayer houses, and other religious buildings, including architectural monuments, were recorded. At least 28 structures of spiritual significance (not including adjacent buildings) have already been damaged in at least six regions of Ukraine: Kyiv, Donetsk, Zhytomyr, Luhansk, Kharkiv, and Chernihiv. The vast majority of religious buildings destroyed and damaged as a result of air bombing and rocket attacks by the Russian invaders are Orthodox cathedrals. Among the affect religious buildings is also the synagogue of the United Jewish community of Ukraine in Kharkiv, mosques in Kostiantynivka and Mariupol of the Donetsk region, and the Ukrainian Evangelical Theological Seminary in Pushcha-Vodytsya, near Kyiv. On the night of 13th of March, the Russian forces have shelled the Svyatohirsk Lavra of the Ukrainian Orthodox Church, where around a thousand people were located at that moment – more than 30 civilians were wounded. Therefore, Russia is destroying the spiritual heritage of Ukraine, independently of the confessional affiliation of the religious buildings.

During three weeks of military operations, the Russian army killed at least four Christian priests on the territory of Ukraine, captured at least two more (one of them was later released), and there was an attempt of entry into the dwelling of one.

As an example, on February 27, 2022, the priest of the Odesa Diocese of the Orthodox Church of Ukraine Fr. Vasilyi Virozub, who was on board the Sapphire rescue ship, which was supposed to pick up the bodies of Ukrainian soldiers killed on the Snake (Zmiinyi) Island, was abducted by Russian troops.

On February 28 in Kyiv Metropolitan Epiphanius (Dumenko), Primate of the Orthodox Church of Ukraine (OCU), survived an attempted entry into his dwelling on the territory of the St. Michael's Golden-Domed Monastery. Security has neutralized a Russian sabotage group that tried to enter the territory of the monastery. Also, tags used by the Russian armed forces to direct fire on Ukrainian cities were found and neutralized near the territory.

On March 1 as a result of the shelling by Russian troops of the village of Grabivka in the Kulikovsky district of the Chernihiv region, rector of the Holy Trinity Church of the Ukrainian Orthodox Church hieromonk Feodosiy (Goncharov) has died from a shrapnel wound.

On March 2 the Russian army killed a priest of the Orthodox Church of Ukraine Fr. Maksym Kozachyna, who served in a church near the town of Ivankiv, Kyiv region. At the time of the murder, he was wearing the clothes of a clergyman.

On March 5 they also killed the priest of the OCU Fr. Rostyslav Dudarenko. The priest was killed in his native Yasnogorodka village of the Fastiv District of the Kyiv region, but his body was found only on the next day.

On March 5 in Bucha, Kyiv region, a teacher of Church Slavonic and Greek at the Kyiv Theological Academy and Seminary Oleksandr Kislyuk was shot.

On March 9 in Mariupol, Donetsk region, the Russian military captured two brothers – Mikhail Reznikov, the pastor of the local church, and his brother Andrey Fomenko, who is raising ten foster children.

On March 14 the dwelling of the priest of the OCU Fr. Oleg Nikolaev from the occupied Berdyansk was searched, he was arrested, and taken to an unknown destination. Fortunately, the priest was eventually released home to his sick wife, who needed constant therapy.

On March 14 the headquarters of the Armed Forces of Ukraine published a report on recorded non-isolated cases of use of civilian infrastructure by Russian troops, in particular churches and other religious facilities, for setting up firing positions, placing weapons and military equipment, which, in addition to endangering the civilian population, is also an act of sacrilege and abuse of the shrine.

Despite the above mentioned, The Primate of the Russian Orthodox Church patriarch of Moscow Kirill (Gundyayev) publicly blessed the Russian army to war against Ukraine, as he said after the liturgy on the feast of the Triumph of orthodoxy in Moscow. And in the response letter to the World Council of Churches dated by March 10, 2022, he spread false narratives of Russian propaganda about the alleged war of the West against Russia, keeping silent about the facts of the terrible destruction of civilians and cities in Ukraine by the Russian aircraft and rocket attacks. Thus, he supported the armed aggression of the Russian Federation and the persecution of other faiths on the territory of Ukraine.

In this regard, Euromaidan SOS, participants of the Religious Freedom Roundtable in Ukraine, and other NGOs that have signed up below call for:

1. International organizations and UN member states – to address the Russian Federation with a demand to end the war against Ukraine and the ongoing offensive on religious freedom within the framework of the war, as well as immediately release all citizens of Ukraine, who were imprisoned on the grounds of professing their religious beliefs in the occupied Crimea and other Ukrainian territories controlled by Russian troops.

3. World Council of Churches – to exclude from its membership The Russian Orthodox Church, break off relations with it, and condemn the quasi-religious component of the Russian World ideology, as religion should serve peacebuilding and should not be used to justify the groundless aggressive war of the Russian Federation against Ukraine, which is accompanied by the destruction of the civilian population of Ukraine, shelling of schools, kindergartens, hospitals, maternity hospitals, and other critical infrastructure facilities.

The Appeal was signed by:

If you want to sign the Appeal, please, fill out this form: https://forms.gle/ZpQDNASw7Awy3uFK8